DU Admission 2021 - PC : My Result Plus
The Kirori Mal College, Maharaja Agrasen College and many other colleges affiliated to the University of Delhi has issued the third cut off list 2021 for admission to undergraduate programmes. According to the media reports, the varsity has already received a total of 1,18,878 applications under first and second admission round of DU cut off 2021. As many as 51,974 students have confirmed the seats by paying the admission fee  till 5 pm on Friday.
About 74 percent of the 70,000 seats have been filled throughout the colleges affiliated to the University of Delhi. Furhter, 10,591 applications have been approved by college principals. Cadndiates should note that the admissions against the 3rd cut-off list of DU 2021 will commence from October 18 (10 am) and will be concluded by October 21 (11:59 pm). While the principal of Delhi University colleges will have to approve the admissions through the DU third cut-off list 2021 by October 22 (5 pm). Eligible candidates can pay the admission fee against the DU third cut off list 2021 till October 23 (5 pm).

The DU affiliated colleges have already released the first cut-off list and second DU cut-off 2021for Delhi University UG admissions on October 1 and October 9, respectively. A report mentioned under the PTI states - "he third cut-off list is likely to see a drop of up to one per cent for courses. We have already filled up the unreserved seats for B.Com (Honours) while OBC is almost filled up. There will be vacant seats in the reserved categories and there is likely to be a reduction of up to one per cent in the third list, said Manish Kansal, admission convener at Hindu College."

Jesus and Mary College has released DU 3rd cut off list. The college has closed admission for all courses except Hindi and vocational courses. 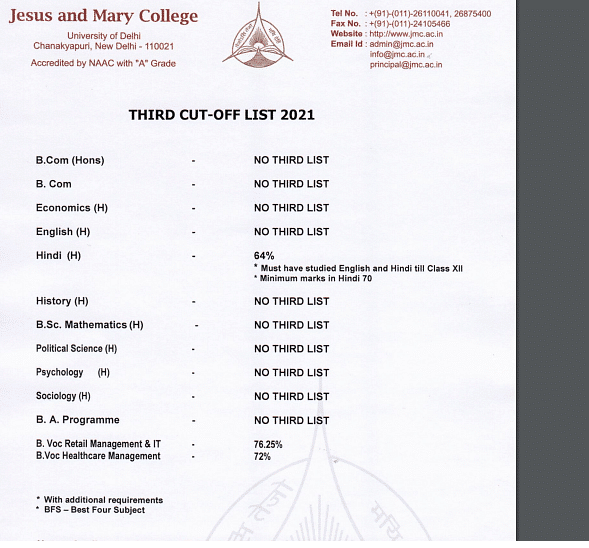 College of Vocational Studies has released the third cut-off list for the students. Students will be able to check it from the official website. 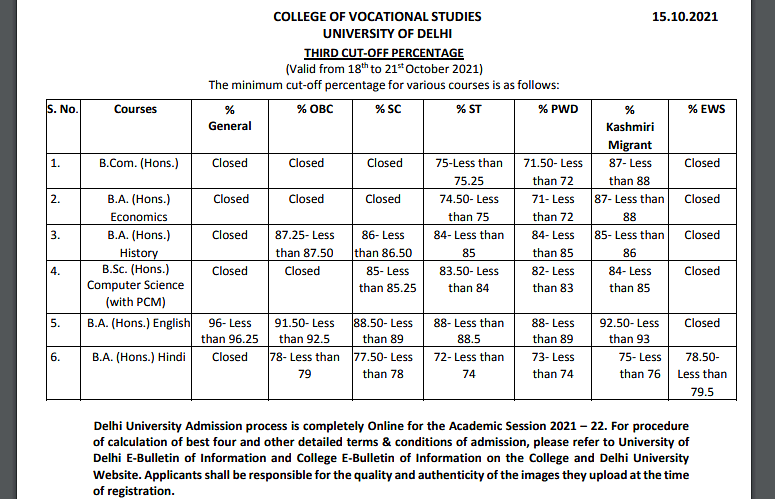 Maharaja Agrasen College 3rd Cut Off List is now available on the official website. The admission for B.Com Honors for general candidates is now closed. Also, the admission of candidates in BA (H) English is closed for OBC, SC, EWS candidates. 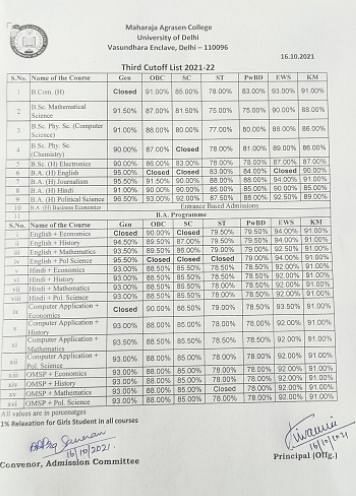 Kirori Mal College has released its third cut-off list and the cut-off for science subjects has dropped sharply.